​​only .99 cents. No internet required.  Some like to listen and learn and not just read. 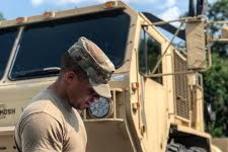 This page contains all the Steps to Perform LMTV PMCS for LMTV vehicles for the Army, Air Force and Marine Corps.  The purpose is to help Soldiers become better Educated and earn quicker Army Promotions by assisting in not only their Army Educations but also their College Educations as well.  It Also contains notes on Maintenance, fluid levels and much more information.  Steps to perform Before, During, After, Weekly and Monthly PMCS Checks with TM Item numbers to enter on the DA Form 5988 or DA form 2404. You No Longer need to Share one TM between 4 Vehicles or Make Copies of a Single TM in the Platoon any longer.  Conveniently use your Phone to go Step by Step during the PMCS Process.

Questions and Answers Exactly as they will be asked at the board.

The exact Questions as they will be asked by the Board members.